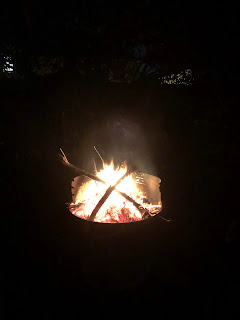 There are areas of deprivation in Edinburgh, their residents dubbed "the socially excluded." They can be dangerous even to travel through, and one night when I was travelling home on the Rough Bus a rock came flying through a window. Some of the socially excluded enjoy throwing things at symbols of the ordered society from which they feel excluded: busses, police cars, ambulances.

Therefore, I was not terribly surprised yesterday evening when our driver suddenly stopped the bus before driving through a notorious slum and shouted at us to shut the windows. I reconsidered our seats but decided they were relatively safe from flying rocks. The sky was bursting with fireworks and dark silhouettes were thronging the streets. It was Bonfire Night, aka Guy Fawkes Night, allegedly the celebration of "papists" failing to blow up the House of Lords in 1605, as if anyone living in an Edinburgh slum could care less about the House of Lords. A goodly number of them are themselves papists---or descended from us anyway.

I felt a bit uneasy, thinking about a neighbouring family who, for the first time ever, I saw walking together, two parents, two children, down our street as we waited at the bus stop, probably bound for some official Bonfire Night fireworks display.

Our slums, by the way, are mainly populated by "White, Scottish" (as the Census denotes them) although there are a number of immigrants from various countries there, now, too. I hope their White, Scottish neighbours warned them about Bonfire Night. I saw a trio of Indonesian ladies in hijab get off the bus at a spot I should not like to alight after dark, and I hoped they got home okay.

We were going to a concert performance of Gilbert and Sullivan's Patience. It was held last night in the Canongate Kirk, the official church of the Royal Family when they are in residence at Holyrood Palace. The church was comfortably full of the kind of people one would expect to find at an Edinburgh G&S performance: quiet, orderly, companionable, some wearing tweed jackets, some draped in silk scarves.

I mention this for contrast.

After the performance, at which we recognised seven friends or so, we went to the Tollbooth Tavern with five of them and had a pint (or, in my case, a half-pint) of ale. We talked about 18th century Chinese wallpaper and ecclesiastical vestments.

Benedict Ambrose and I got back on the Rough Bus at about 10:45.

This time the driver told us that he would be deviating from the route and that anyone who wanted to go to [slum] would have to get off at the last stop before his detour. This understandably disconcerted the passengers, some of whom were foreign students. However, Benedict Ambrose and I were merely annoyed by the delay (the driver seemed to get lost twice or thrice), suspecting and then knowing--I checked the news on my phone--that the point was to avoid the slum, which had been locked down by police.

It was very dark, indeed, and it was difficult to see the bus stops. We rang the bell a trifle late for ours, so we alighted further from our home than we expected. The driver, B.A. thought, was rather frazzled. As he said so, I heard loud wailing. A youngish man in a hoodie was lurching down the other side of the street, one hand held to his torso, making gulping noises and occasionally bursting into noisy sobs. I couldn't see his face, but I had the fleeting impression that it was bloody.

"Ambulance?" I suggested, but Benedict Ambrose thought that the man was merely drunk. He was, after all, still on his feet. We scurried--well, I scurried--home.

I could write here at great length what I think is fuelling the rage of the socially excluded in Scotland, but instead I'm going to the gym to prepare my body for the old age that may leave me vulnerable to the fury of the young, Scottish and poor. I will throw out three concepts for exploration later: the breakdown of the family; consumerism; celebrity culture--especially celebrity culture. Jack and Lewis will never live like Kanye West, and they think they've been robbed.

They have been robbed, in fact, but not of Bel Air mansions and babes. But that's a subject for later, for I'm off to the gym.