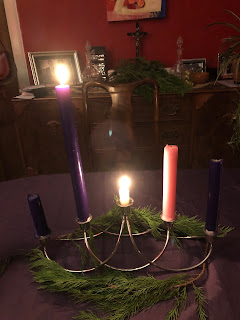 Happy December and, more importantly, a blessed Advent! We have decorated the table with Advent candles and the cypress (leyandii) that we found strewn on the pavement after Storm Arwen ripped through that wealthy neighbourhood.

"The branches that fell from the rich man's tree/Shall furnish forth the poor man's feast," I declaimed after gleaning the branches.

"Who wrote that?" asked Benedict Ambrose.

"I did just now," I replied smugly but then worked on it on and off for the next day or so as obviously we weren't going to eat the branches. Does "Shall ornament the poor man's feast" scan?

Meanwhile, we are not so terribly poor as all that, for we were delightfully parsimonious this month despite a snazzy lunch in the New Town and our trip to London. Well, I say "delightfully," but B.A. might object to the carefree impression that creates. In fact, I drove B.A. bananas, as you will see.

Here are the food bills for the month:

This is significantly larger than the last few months but only because we hosted an out-of-town couple at a restaurant on George Street. It was a memorable meal, one of the luxuries of life well worth economising for.

Looking at the last few months, we spent as follows on food:

The food bill is now our largest monthly expense, and obviously I like August's grocery bill better than October's. As November progressed, I saw we were clearly spending more than £10 a day and once again likely to go over the budgeted £300. Thus, I began to get a bit squirrelly and shifty-eyed. During the last week I began to pop out to Tesco to buy the very cheapest bread and the minimum needed to make frugal suppers. As it was, we were still  45 pence or so over by the 30th.

B.A. rebelled against this spartan regime, for he wanted to celebrate St. Andrew's Day properly. Thus, he printed off a Tesco Club Card coupon for £5 and sailed forth to get his beer "off the books,"  as it were. Delighted by the coupons, I asked him to get some butter, too.

This was not as easy it is sounds, for the check-out machine would not allow B.A. to buy just the beer and the butter with his coupon. He had to have £5 or more of stuff.  He collected some stuff, but it was still not enough. In the end he enlisted the help of a young cashier, telling him that he wasn't actually homeless but that his wife was very strict with the budget. They managed to make the check-out machine work by putting a banana on the scale and pressing on it.

B..A. was very apologetic to the cashier, who then said it was the most interesting thing that had happened all day. Hopefully it gave him a  funny story to tell when he got home. B.A.'s own amusement was, shall we say, mingled, and so this month I am not going to mention the cumulative grocery bill at all.

Meanwhile, I am pleased that we didn't beggar ourselves in London, which happens to unwary travellers, and also that in terms of groceries and cafe breakfasts, it doesn't seem to be more expensive than Edinburgh, second-most expensive city in Britain.

Here, for your entertainment and my nostalgia, is a list of where we splashed out our RBCT cash:

Lest you worry that we went to our South Kensington bed hungry, I will remind you that we went to Waitrose and had a hotel room picnic. We ate the leftovers for breakfast and then lunch on the train home. Incidentally, Scots do not joke about themselves as being cheap. Apparently they joke about the good citizens of Aberdeen being cheap. Thanks to the oilmen, Aberdeen is a lot more expensive than it used to be, though. Hopefully the Aberdonians are richer, too.